Tour Moray and Salt Mines of Maras in Half Day 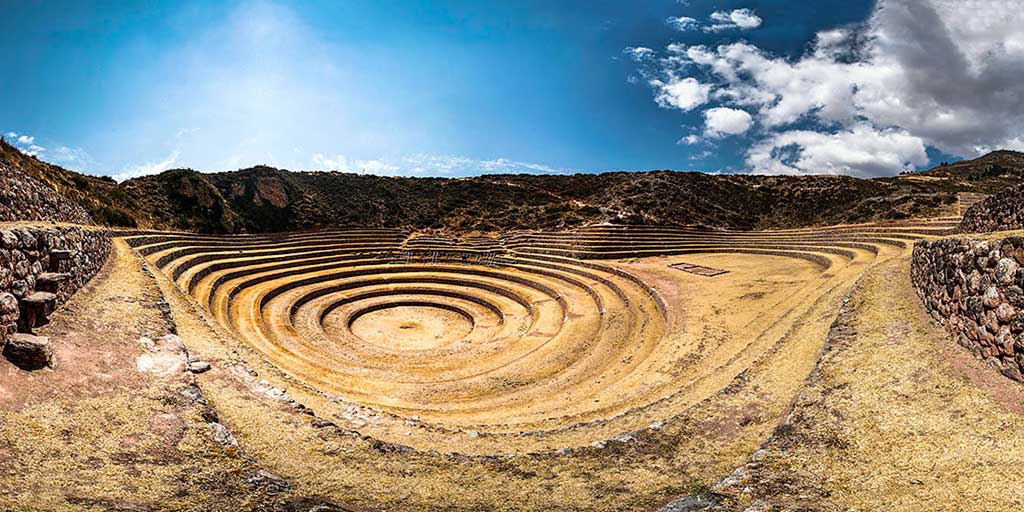 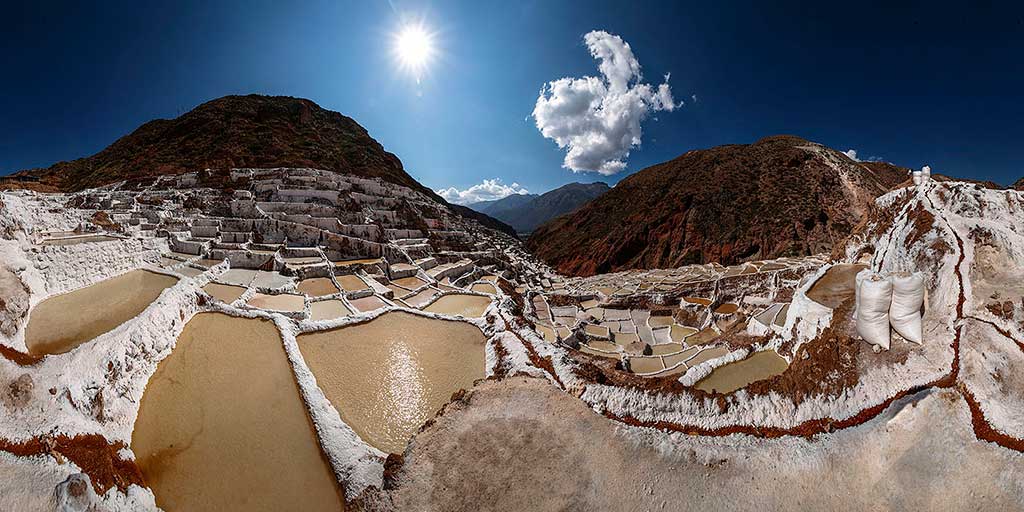 Maras is a district of the Urubamba province, possible to be reached through a paved road from kilometer 50 on the road Cusco - Chinchero - Urubamba. It is located towards the west of Qosqo at an altitude of 3300 mts. (10824 feet); over a plain that in prehistoric times was a huge plateau, from which it is possible to observe the range of mountains of Urubamba including the snow capped mountains of Weqey Willka (today "La Veronica", 5682 mts., 18641 ft.) and "Chikon" (5530 mts., 18143 ft.).

It seems that in Maras there was a pre-Inkan settlement with subsequent discontinued occupation. All over this zone there is a large amount of pottery pieces of the "Chanapata" culture, as well as obsidian scrapers and knives. The town was founded in colonial times by Pedro Ortiz de Orue, and its important occupation began when the Cusquenian Inkan noblemen were dispossessed of their palaces in Qosqo and had to move settling some other small towns such as San Sebastian and Maras. Likewise, during the war started by Manko Inka willing to recover his Quechua nation, it served as stronghold for invaders that raided against the Ollantaytambo town that was occupied by the Inka during 2 years.

Many of its houses are emblazoned with Spanish nobility coats of arms on their lintels, which indicates the importance gained by the town in colonial times. By that time, it was an obliged way for muleteers and their mule droves transporting tropical goods and especially coca leaves from the higher jungle for supplying the markets of the city and the country. It was declared "Villa of Saint Francis of Assisi of Maras" (Villa: city or town that had certain privileges).

By that time it had much more importance than the Urubamba settlement; but, today it is a town that languishes due to its isolation and development of modern life. It has a church made with sun dried mud bricks, typical of the village religious architecture, in which front patio is a cross carved in granite. Inside the church are Cusquenian school canvases representing the Apostles, and some other very nice ones, the artist being Quechua painter Antonio Sinchi Roqa Inka. He was native from Maras and painted carefully for its church; he was contemporary of bishop Mollinedo y Angulo and became famous by the middle of XVII century.

About 7 kms. (4.3 miles) away southwest from Maras is Moray, a very unique archaeological site in the region. It is possible to reach it by car through the dusty road and the path departing from the town. Those are enormous natural depressions or hollows in the ground surface that Inkas used for constructing irrigated farming terraces around them. What is surprising is that the difference of average annual temperature between the top and the bottom reaches even about 15°C (59°F) in the main depression that is about 30 mts (100 feet) deep. In those natural formations, nature has created an environment, conditions or micro climates that in modern times people create in greenhouses or hothouses. Moray, because of its climate conditions and many other characteristics, was an important center of domestication, acclimatization and hybridization of wild vegetable species that were modified or adapted for human consumption.

Therefore, it is a prototype of a greenhouse or experimental biological station, very advanced for its age that helped so that the ancient American Man could leave for mankind about 60% of the vegetable goods that are consumed; so that the Andean Man could consume three thousand different potato varieties, one and a half hundreds of maize, and many other rich goods. Nevertheless, there are still many enigmas about this site, enigmas that rise because of the lack of serious scientific researches that could clear present doubts. Structures found over here are typically Inkan; although, some authors suggest that they are earlier ones, at least in the lower terraces.

One of the enigmas is the way how drainage for water flowing through the aqueducts worked; it is suggested that there must be underground channels built by the depressions' bottom allowing water to drain. It is also argued that the bottom is over a very porous natural rock formation that enables water filtering toward the earth's interior; the truth is that even today, in the depressions' bottoms there are no floods neither inundation in the rainy season. It is indispensable to carry out serious palynology studies; that is, divers analysis of the pollen samples that are found in Moray, thus it will be possible to know the nature, species, quality and some other characteristics of the vegetables cultivated over here.

Towards the northwest of the Maras village are the famous "salt works", which are possible to reach walking by the trail or by car through a dusty road that is almost useless in the rainy season. The Maras "salt works" to which some people call "salt mines" are constituted by about 3000 small pools with an average area of 5 m² (53.8 ft²), constructed in a slope of the "Qaqawiñay" mountain. People fill up or "irrigate" the pools during the dry season every 3 days, with salty water emanating from a natural spring located on the top of the complex, so that when water evaporates the salt contained in it will slowly solidify. That process will be carried out approximately during one month until a considerable volume of solid salt is obtained; about 10 cms. (4 inches) high from the floor. That solid salt is beaten thus granulated, then packed in plastic sacks and sent to the region's markets; today that salt began being treated with iodine, thus, its consumption is not harmful.

We pick you up at 8:30am or 12:30pm drive in our private transport until the village of Maras where they still keep a good part of its colonial architectural beauty. You can see made of thin stone, lintels with sculptures in bas-relief.  Then we go to Salineras where the salt mine is located consisting of 3,000 small pools roughly 5 square metres (53.8 ft²) in size. Every three days, during the dry season, workers fill the pools with salt water that comes from a natural hot spring at the top of the Maras complex. When the water evaporates from the pool, the salt is left for collection. This process is carried out over a one month period until the pools reach an approximate volume of solid salt that is 10 centimetres (4 inches) in height. The salt is ground up, treated with iodine packaged and sent to various markets in the region. It is a short picturesque walk downhill from Salineras taking approximately 40 minutes back to our transport.

Then we go to the Moray ruins located at 3,450m, where we find the agricultural terraces of Moray with their complex system of irrigation and terraces. Different levels of terraces are carved into a huge bowl, part of which was further excavated by the Incas. The terraces have varied microclimates depending on how deep into the bowl they are and they were thought to have been used by the Incas to discover the optimal conditions for their crops. These terraces served as a natural green house to grow an extraordinary variety of crops at an altitude that they would typically only grow in the tropical Andes. It has also been suggested that they had a cosmological meaning.

Then we return to your hotel in Cusco.

END OF OUR SERVICES

For availability of spaces for this service, please contact us info@salkantaytrek.org and we`ll send you detailed information, prices, terms and conditions.

Please keep in mind that significant price reductions are available for groups. All our tours are fully guaranteed, departure every day. Contact us for more information for the tour that you are choosing, or to begin customizing your own itinerary. recommendations:

"ITEP Eco Travel is a tour operator travel agency in Peru and the city of Cusco, We really know what we do and offer, We are well managed, with several offices in Peru and a long list of travel destinations , offering all travel alternatives in Perú, from family trips, honeymoon trips and luxury travel, including adventure tours and exploring trips to the jungle, for almost any budget”

NOTE: ITEP Eco Travel, specializes in organizing the ideal travel plan to Peru, with hotels and destinations that you choose, because we have all confidential and promotional rates. For guidance on how to organize your custom package. Please write us.

Every day of the year (please check availability in our groups).

- Daily departures are available along the year, the recommended period for this trek is April to October.
- All private service departure dates are adapted to your request any day you choose.

The world opens up a little more for a small group, We have the freedom to move around

Preparation prior the Hiking Trips

due to the altitude of the highest point in Moray we recommend a period of at least 1 day for acclimatization in Cusco at 3350m/9840ft.

Vegetarian option at no extra cost. Check our regular menú 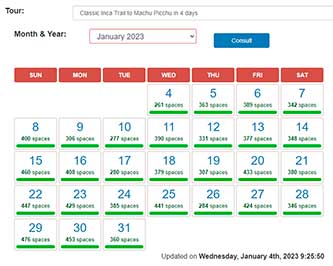 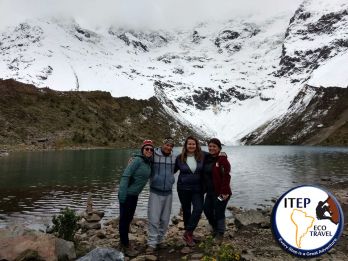 Great Trek! The views were spectacular and worth the hike. If unable to adapt to the altitude the guide will find an alternative option with first aid services at hand. They have vegetarian options for the meals provided. You learn about the culture and the experience is one of a kind! I Will be back to try the other routes! Jorge did a great job!amazing guide. 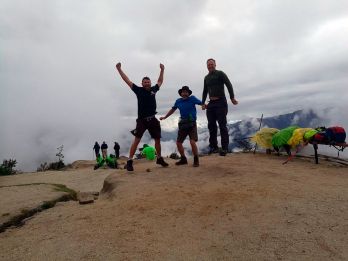 Good was amazing, we even had cake! Jorge was full of good information and made it great tour 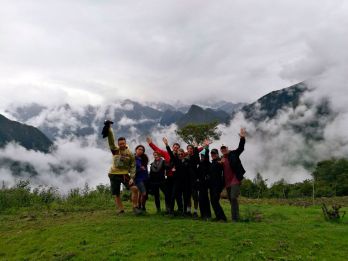 Did the Private Inca Jungle excursion with some adjusted camping options and loved the areas where we camped (or tried to camp as well). Flexibility is the name of the game in those mountains and this team knows how to handle it. They led a great excursion and taught us a lot about Peru and the Andean Mountains where we were cutting through. All good things for this company! Awesome adventure.